Last week I spent some time running map/reduce jobs on Amazon EC2. In particular, I compared the performance of Plasma, my own map/reduce implementation, with Hadoop. I just wanted to know how much my implementation was behind the most popular map/reduce framework. However, the suprise was that Plasma turned out as slightly faster in this setup.
This article is also available in other languages:

I would not call this test a "benchmark". Amazon EC2 is not a controlled environment, as you always only get partial machines, and you don't know how much resources are consumed by other users on the same machines. Also, you cannot be sure how far the nodes are off from each other in the network. Finally, there are some special effects coming from the virtualization technology, especially the first write of a disk block is slower (roughly half the normal speed) than following writes. However, EC2 is good enough to get an impression of the speed, and one can hope that all the test runs get the same handicap on average.

The task was to sort 100G of data, given in 10 files. Each line has 100 bytes, divided into a key of 8 bytes, a TAB character, 90 random bytes as value, and an LF character. The key was randomly chosen from 65536 possible values. This means that there were lots of lines with the same key - a scenario where I think it is more typical of map/reduce than having unique keys. The output is partitioned into 80 sets.

I allocated 1 larger node (m1-xlarge) with 4 virtual cores and 15G of RAM acting as combined name- and datanode, and 9 smaller nodes (m1-large) with 2 virtual cores and 7.5G of RAM for the other datanodes. Each node had access to two virtual disks that were configured as RAID-0 array. The speed for sequential reading or writing was around 160 MB/s for the array (but only 80 MB/s for the first time blocks were written). Apparently, the nodes had Gigabit network cards (the maximum transfer speed was around 119MB/s).

During the tests, I monitored the system activity with the sar utility. I observed significant cycle stealing (meaning that a virtual core is blocked because there is no free real core), often reaching values of 25%. This could be interpreted as overdriving the available resources, but another explanation is that the hypervisor needed this time for itself. Anyway, this effect also questions the reliability of this test.

Hadoop is the top dog in the map/reduce scene. In this test, the version from Cloudera 0.20.2-cdh3u2 was used, which contains more than 1000 patches against the vanilla 0.20.2 version. Written in Java, it needs a JVM at runtime, which was here IcedTea 1.9.10 distributing OpenJDK 1.6.0_20. I did not do any tuning, hoping that the configuration would be ok for a small job. The HDFS block size was 64M, without replication.

The contender is Plasma Map/Reduce. I started this project two years ago in my spare time. It is not a clone of the Hadoop architecture, but includes many new ideas. In particular, a lot of work went into the distributed filesystem PlasmaFS which features an almost complete set of file operations, and controls the disk layout directly. The map/reduce algorithm uses a slightly different scheme which tries to delay the partitioning of the data to get larger intermediate files. Plasma is implemented in OCaml, which isn't VM-based but compiles the code directly to assembly language. In this test, the blocksize was 1M (Plasma is designed for smaller-sized blocks). The software version of Plasma is roughly 0.6 (a few svn revisions before the release of 0.6).

Given the uncertainty of the environment, this is no big difference. But let's have a closer look at the system activity to get an idea why Plasma is a bit faster.

In the following I took simply one of the datanodes, and created diagrams (with kSar): 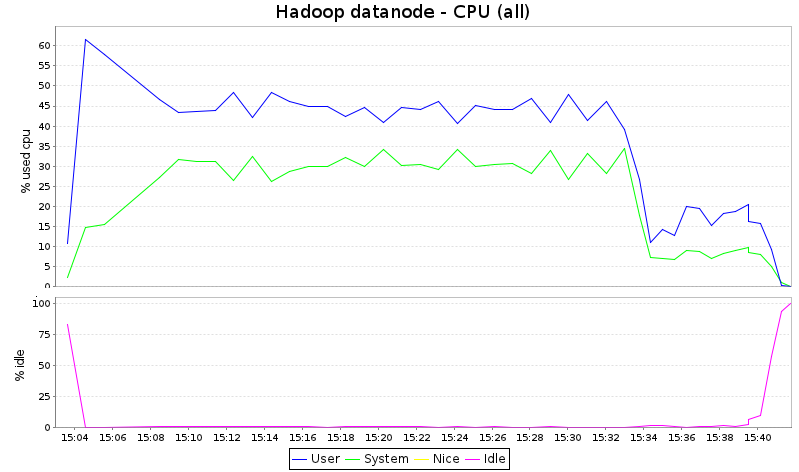 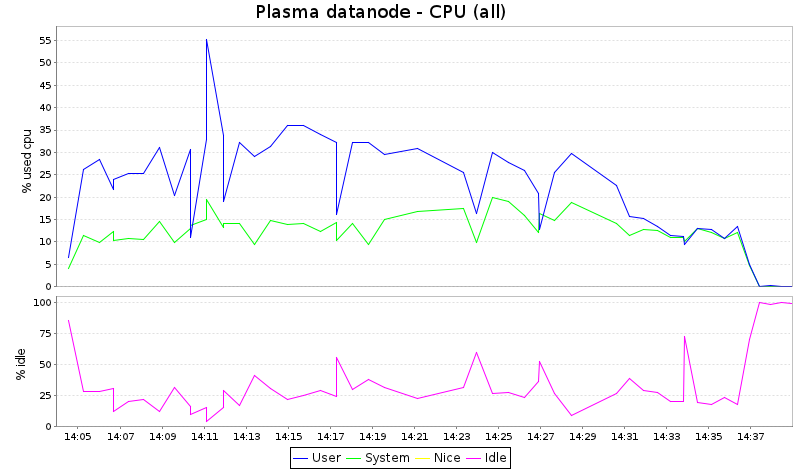 Note that kSar does not draw graphs for %iowait and %steal, although these data are recorded by sar. This is the explanation why the sum of user, system and idle is not 100%.

What we see here is that Hadoop consumes all CPU cycles, whereas Plasma leaves around 1/3 of the CPU capacity unused. Given the fact that this kind of job is normally I/O-bound, it just means that Hadoop is more CPU-hungry, and would have benefit from getting more cores in this test.

In this diagram, reads are blue and red, whereas writes are green and black. The first curve shows packets per second, and the second bytes per second:

Summing reads and writes up, Hadoop uses only around 7MB/s on average whereas Plasma transmits around 25MB/s, more than three times as much. There could be two explanations:

The background for the second point is the following: Because Hadoop partitions the data immediately after mapping and sorting, the data has (ideally) only to cross the network once. This is different in Plasma - which generally partitions the data iteratively. In this setup, after mapping and sorting only 4 partitions are created, which are further refined in the following split-and-merge rounds. As we have here 80 partitions in total, there is at least one further step in which data partitioning is refined, meaning that the data has to cross the network roughly twice. This already explains 2/3 of the observed difference. (As a side note, one can configure how many partitions are initially created after mapping and sorting, and it would have been possible to mimick Hadoop's scheme by setting this value to 80.)

These diagrams depict the disk reads and writes in KB/second:

The average numbers are (directly taken from sar):

Obviously, Plasma reads data around twice as often from disk than Hadoop, whereas the write speed is about the same. Apart from this, it is interesting that the shape of the curves are quite different: Hadoop has a period of high disk activity at the end of the job (when it is busy merging data), whereas Plasma utilizes the disks better during the first third of the job.

Neither of the contenders utilized the I/O resources at all times best. Part of the difficulty of developing a map/reduce scheme is to achieve that the load put onto the disks and onto the network is balanced. It is not good when e,g, the disks are used to 100% at a certain point and the network is underutilized, but during the next period the network is at 100% and the disk not fully used. A balanced distribution of the load reaches higher throughput in total.

Let's analyze the Plasma scheme a bit more in detail. The data set of 100G (which does not change in volume during the processing) is copied four times in total: once in the map-and-sort phase, and three times in the reduce phase (for this volume Plasma needs three merging rounds). This means we have to transfer 4 * 100G of data in total, or 40G of data per node (remember we have 10 nodes). We ran 22 cores for 1975 seconds, which gives a capacity of 43450 CPU seconds. Plasma tells us in its reports that it used 3822 CPU seconds for in-RAM sorting, which we should subtract for analyzing the I/O throughput. Per core these are 173 seconds. This means each node had 1975-173 = 1802 seconds for handling the 40G of data. This makes around 22 MB per second on each node.

The Hadoop scheme differs mostly in that the data is only copied twice in the merge phase (because Hadoop by default merges more files in one round than Plasma). However, because of its design there is an extra copy at the end of the reduce phase (from disk to HDFS). This means Hadoop also solves the same job by transferring 4 * 100G of data. There is no counter for measuring the time spent for in-RAM sorting. Let's assume this time is also around 3800 seconds. This means each node had 2265 - 175 = 2090 seconds for handling 40G of data, or 19 MB per second on each node.

It looks very much as if both implementations are slowed down by specifics of the EC2 environment. Especially the disk I/O, probably the essential bottleneck here, is far below what one can expect. Plasma probably won because it uses the CPU more efficiently, whereas other aspects like network utilization are better handled by Hadoop.

For my project this result just means that it is on the right track. Especially, this small setup (only 10 nodes) is easily handled, giving prospect that Plasma is scalable at least to a small multitude of this. The bottleneck would be here the namenode, but there is still a lot of headroom.

Where to get Plasma

Plasma Map/Reduce and PlasmaFS are bundled together in one download. Here is the project page.